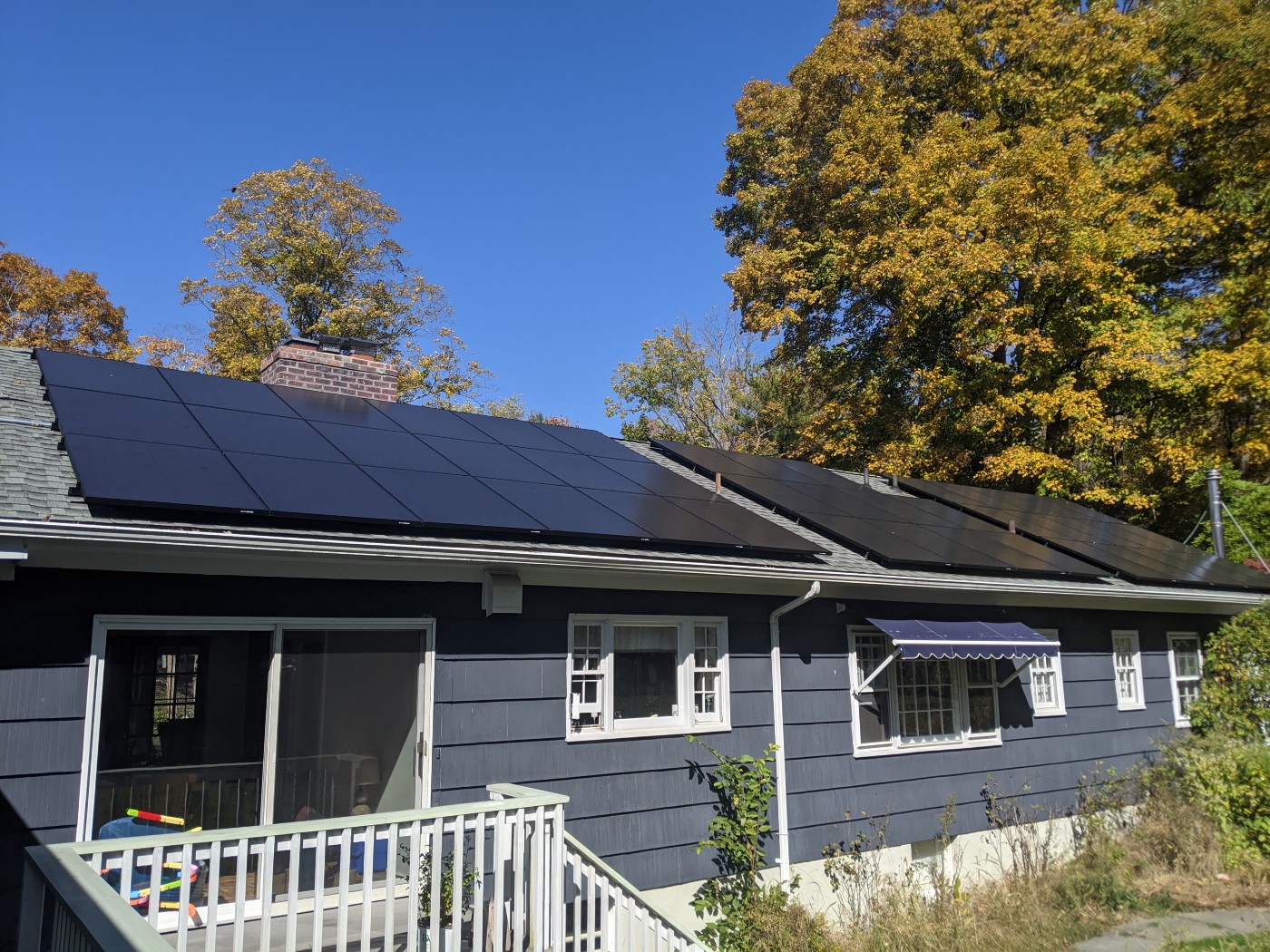 Below is an article by SunBlue customer, John Pershing where he walks through his experience of adding solar panels to his home. The original article can be found here.

In our first essay, we waited until the end to name-drop the provider, mostly because they were less than perfect and we wanted to hold off until all the context was presented. When we speak to anyone about photovoltaic (PV) arrays, what we lead with is that Chris Hale from Sunblue Energy is a truly phenomenal resource and if you get work done it should be through him and his company. We joke that the best thing that we got from our geothermal provider was Chris Hale’s contact info.

Like with the geothermal installation, the impetus for the project was a general annoyance with our high electric bill and we also had various indications that it was only going to get higher. We’d bought a battery electric vehicle (BEV) earlier in the year but had not yet driven it a huge amount as COVID-19 dramatically decreased our outings. We also expect that when we eventually replace our other non-BEV vehicle that it’ll be with a BEV. More generally, we expect power requirements to go up as time goes on as various things become more power-hungry. We had committed to the Geothermal HVAC installation and knew that it would increase our electricity usage precipitously throughout colder months. With this in mind, we decided to move forward and explore solar.

The initial survey was at no cost to us and happened over a few visits to our house. Chris Hale, the founder of Sunblue Energy, came over and talked us through the process and did a “from the hip” review of our home to make some initial recommendations. The tax credits for solar are materially more complicated than geothermal and he was very clear and careful when explaining how things worked. He answered all of our questions and was strikingly honest and straightforward. Chris provided us with a slate of options for panels, explained the pros and cons of each, and genuinely didn’t seem to be pushing us toward the more expensive options (something we greatly appreciated). After some back and forth via email we signed a letter of intent and his team came out to do a high-fidelity survey to produce exact schematics of what they’d be installing. After the surveys had been completed Chris was able to produce a more exact breakdown of what the project would cost and we signed a contract.

There was a somewhat odd step where we had to work with Chris to orchestrate the delivery of the panels/hardware prior to installation starting. We got a large array installed so it was a lot of stuff sitting in our driveway for a few days before the installation team got started. We’ve already sung the praises of Chris himself, but now we will take a moment to extol the virtues of his team. Where the geothermal folks were less than communicative, the Sunblue team members were incredibly clear and communicative about what work was being done and when. We really can’t say enough good things about this team. They were friendly and clearly wanted to put together an installation that met all our needs without any compromises. We mentioned in the first article that due to some scheduling uncertainty we ended up with the geothermal drilling team on-site at the same time as the PV installation team. Chris (who had not planned to be present for this) came out and essentially took on the role of foreman to make sure nobody got in anyone else’s way.

The installation itself isn’t wildly complicated. They mount racking on the roof, run cables encased in pipes around the roof to your electrical service panels, mount the PV panels and microinverters, and then do the electrical work to wire the panels into the service panel and utility meter. Chris’ team put a lot of effort into making sure the various cable runs were as short as possible and positioned in ways that didn’t produce an undesirable aesthetic. There was a fair bit of crawling around in the attic to find the right places to jump from one roof to another so that everything ended up mounting cleanly. 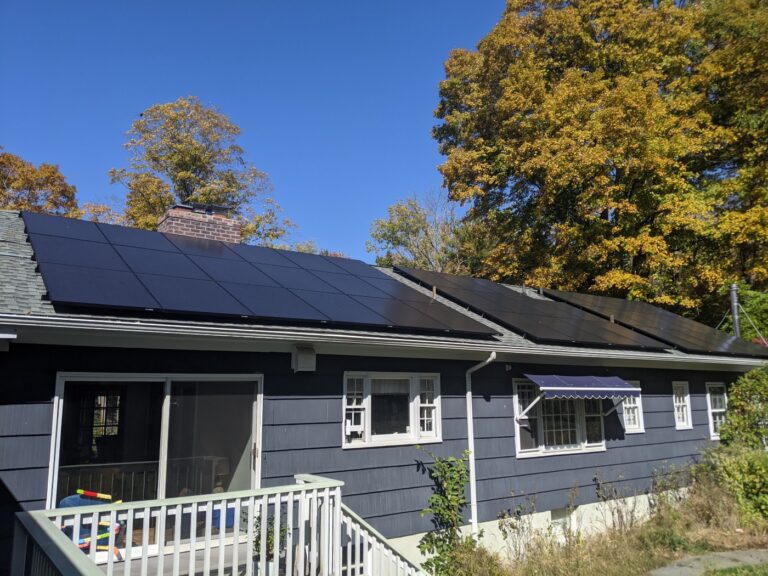 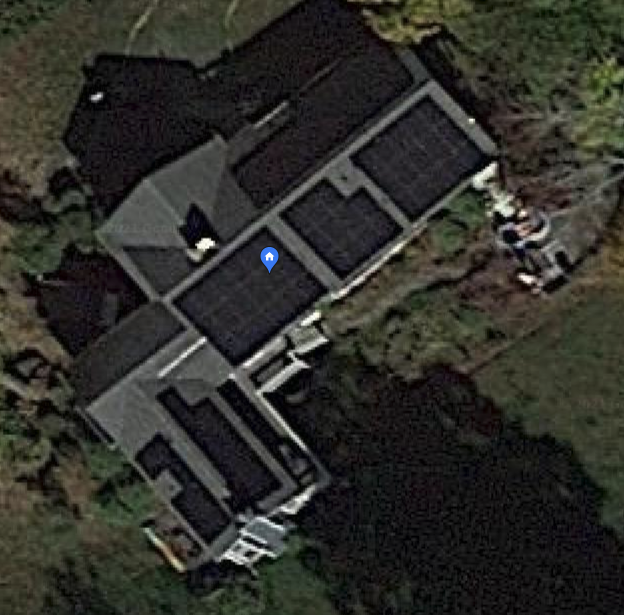 After the installation was complete, they ran the system for a couple of days to make sure it worked and then woefully we had to shut the system off for a few weeks while we waited for ConEd and our village to process all the permits. There were a couple of permits that were just paperwork processed by the town but several things that required folks to come on-site and poke around. Some of these inspections had the potential to impact the magnitude of portions of our tax incentives, but everything came up as Chris and his team had projected.

As we’ve noted, we have large power requirements so when scoping out the system we decided to just max it out. Our house is ranch style and so we have a lot of roof real estate to work with and we ultimately ended up going with the largest solar array that our local power utility (ConEd) will allow for a residential installation (about 31kW). This ended up being 84 panels spread out across the roof, and while some are more optimally placed than others the marginal cost of installing more panels made sense financially. Solar panels lose about 0.5% of their efficiency per year so our thesis was that if we install a massive array and live in the house until our second child graduates high school that even 20 years from now the array will still cover most of our electrical needs.

The way the system works is that if you’re using power while it’s generating power you pull power directly from the microinverters, but if you’re generating more power than you use you push it back into the grid. Even if you install a battery backup, there will be times when you’re fully charged and your production exceeds consumption. This generates credits that are transparently consumed the next time you draw power from the grid. If over a full billing cycle you generate more power than you consume (as we’ve done since April) you carry credits forward on your bill and you only pay a basic connection fee (about $20 though it varies month to month for a reason we can’t discern). Our hope is that our overproduction during the summer months generates enough credits to cover a good slice of our electrical usage in the winter months (when the panels produce less power and the geothermal is drawing more power).

For folks that live in the NYC metro area, it’s worth taking a minute to discuss some ConEd-specific shenanigans related to PV arrays. Unlike many other states, if you consistently carry a surplus ConEd will never pay you for your extra credits. Furthermore, if you eventually move and stay within ConEd’s service area, you can’t take those credits with you. Even more stupid, if you build up a big credit surplus over many years and as the panels become slightly less efficient you cross the tipping point to where you start consuming again if at that time you sell the house the credits can’t be transferred to the buyer. They are tied to both your account and address. One final insult is that surplus credits can’t be used to pay the ~$20 connection fee either. If in April of next year we find that our summer credit surplus sustained us through the whole winter, we expect the easiest way to convert these unusable credits into something useful will be to set up a cryptocurrency mining machine. Thanks, ConEd…

The particular panels that we had installed come with a very nice smartphone app (there’s a desktop-optimized website as well) that can be used for monitoring your usage. It’s been incredibly satisfying to open the app at the end of a sunny day and see the power that’s been generated.

The only “issue” that we have had was following some particularly heavy snowfall this past winter where the panels showed up offline in the app. When we reached out to Sunblue they were responsive and assured us that when the snow melted that they’d come back online and if they didn’t that they would come and address the issue. As they said, as the snow melted the panels came back online.

The topic of snow does bring up the topic of keeping the panels clear. During the winter as the temperature oscillates above and below freezing we experienced “avalanches” when accumulated snow would cascade off the panels. This meant our deck required quite a bit more shoveling than it had in previous winters. During the spring the panels also ended up covered in pollen. I hosed them off once but didn’t have consistent enough day-over-day sunlight to tell if it made a measurable difference.

In hindsight, this was a great project and will be a great investment. The panels will have paid for themselves in eight to ten years and coupled with our geothermal HVAC we’ve largely decarbonized our home.

Get A Free Quote
Tags: About Us, Solar, SunBlue Energy

What It Means To Go Green With Solar Panels

10 Ways To Save Energy At Home

5 Ways To Save Energy During The Holidays